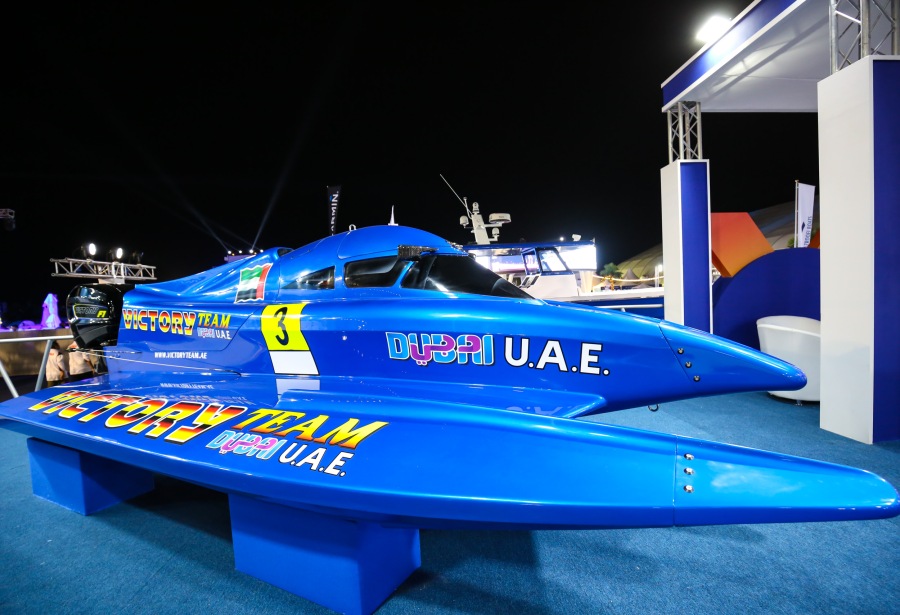 Fun-seekers are experiencing thrills this week at the Dubai International Boat Show, currently taking place at its temporary home at the mouth of the Dubai Canal near Dubai Ladies Club until March 3rd, with adrenaline-pumping action on show both above and in the water.

The 26th edition of the show includes some of the most extreme water sports and exciting toys on offer from leading international and locally-based companies.

Appearing alongside a fleet of luxurious superyachts at the mouth of Dubai Canal, are the latest jetskis, flyboards, speedboats and a collaboration between a submarine maker and a world-famous supercar marque.

Cryptocurrency is making its debut at the Dubai International Boat Show, with Burgess Yachts accepting payment in Bitcoin for its 37-metre Nordic Star, built by Italian company CRM. This classic yacht has played host to some of the greatest celebrities including Frank Sinatra during its time.

UAE company Enata is unveiling its new Foiler boat. Built in the Emirates, the yacht ‘flies’ up to 1.5 metres above the water using hydrofoil technology to create a smooth and exhilarating ride at speeds of up to 40 knots.

World champion Dutch flyboard star Bo Krook is performing a host of thrilling stunts and tricks. Krook’s mastery of the flyboard has made him famous in his native Holland and he has been competing in competitions around the world since 2013.

Representing the UAE is Emirati athlete Manea Al Marzooqi who competes for Dubai-based extreme water sports team XDubai. Brought to you by Seabreacher, Al Marzooqi is a popular figure on the region’s flyboard scene and has been taking part in competitions for two years and was the DIMC UAE National Champion.

Performing daring stunts is World Champion Red Bull Pro athlete slackline walker Alex Mason. The American has taken his sport to new heights, quite literally, by walking across a slackline strung between cliffs outside of Beirut and through the jungles of Hawaii, to name a few of his recent feats.

High-octane adventure is high on the agenda this year thanks to Victory Team, the UAE’s premier offshore powerboat racing team, which is displaying some of its super-fast boats.

Not for the faint hearted, these boats can reach a top speed of 220kmph while still being able to manoeuvre around the tightest of courses.

“Powerboat racing is one of the most exhilarating sports for the teams who take part and the spectators who watch the action from dry land,” said Huraiz Almur Bin Huraiz, Chairman of Victory Team, which competes in the Class 1 World Powerboat Championship.

“The Dubai International Boat Show is one of the most important events of the year for marine sports in the UAE and Middle East and a great opportunity for new fans to discover powerboat racing and cheer on a world-class Emirati team.

“We are delighted to return for the third year and to showcase the cutting-edge technology used by Victory Team to achieve our victories. And this year we are launching a new racing pleasure craft for the big boys to toy around in.  If you have nerves of steel, this is for you.”

Designed to offer maximum visibility, simple operation and outstanding safety, Triton’s submarines, which were used in the making of the BBC’s Blue Planet 2 series, are attracting a lot of attention from budding explorers.

“This year Triton will showcase our best-selling model, the 3300/3 MKII submarine, which are currently undertaking trips, scientific research and documentary film missions around the world,” said Patrick Lahey, Co-founder and Managing Partner of Triton Submarines.

“The versatility of our submersibles means the profile of Triton owners range from individuals seeking to dramatically extend their yachting experience with unique adventures, through to organisations conducting oceanographic research.

“Triton supports only a select number of international yacht shows. In this regard the Dubai International Boat Show stands out as the primary show in the region.”

Project Neptune marries Triton’s diving expertise with Aston Martin’s design and craftsmanship to create a truly unique, three-man submarine made to the highest standards of luxury and sophistication usually reserved for supercars.

Lightweight, powerful, and easy to use, the SEABOB can be used on or below the water, but it truly comes into its own when used as part of a snorkelling, freediving or scuba diving trip with users able to explore the seabed at depths of up to 40 metres with ease.

Mohammed Salah, Operations Manager at Seabreacher UAE, said: “This will be our third time exhibiting at the Dubai International Boat Show. It is a great event that allows us to show the new and different water sport equipment that is available.

“This year we will give a live demonstration of what the Seabreacher can do, which we are sure will be very popular with visitors. There will also be a flyboard stunt show that will be lit up by LED-lights in the evening, which will be special to see.

“There is a lot of interest in these kinds of water sports in the UAE among expatriates and Emiratis, and demand is growing all the time. They are exciting to watch and to take part in and we always have lots of people asking where they can buy or rent the equipment.”

Visitors to the Dubai International Boat show can also experience the thrill of speedboat time trial racing with the SeaKart Time Attack Experience.

An experienced SeaKart skipper will give two passengers a ride they won’t forget down the Dubai Canal with the powerful boat twisting and turning around a track of seven buoys as fast as possible.

Each boat’s finishing time is noted to find out who has the fastest lap of the day, and of the show overall.

The 26th Dubai International Boat Show at the Dubai Canal is open to trade visitors and the public from 3pm – 9:30pm daily from February 27th to March 3rd, 2018. Tickets will be available at the gates priced at AED 65 each. Family tickets are available at AED 160 (two adults and two children over 12) while government employees can attend the show for AED 50 per ticket.